Le Rendez-vous Gourmand de Disneyland Paris is scheduled to be in Walt Disney Studios Park until the 13th October, so not much time to grab the grub, but hopefully it will be back next year. There are regional French stalls, stalls representing European cuisines and, my favourite, the Vegan Kitchen stall. I went for one of everything they had. 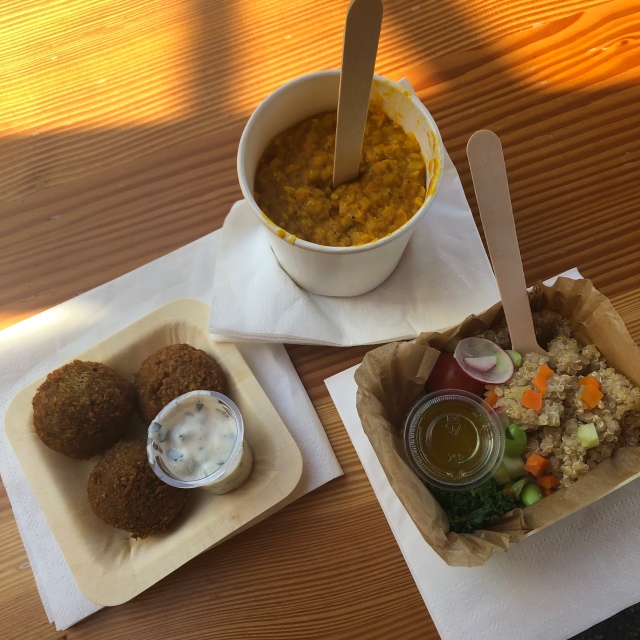 On the top there is a dhal which I really enjoyed. Judging by pictures and descriptions on Instagram it can be rather changeable. Mine was well spiced with the lentils not entirely broken down but other people seem to have had more of a liquid dhal and there are reports of it being bland. I really enjoyed mine though.

The Buddha bowl I did think was bland. The tiny cup of vinaigrette didn’t add much flavour to the veggies and grains. I wouldn’t do this one again.

The falafel… well perhaps I’m basing this on the fact that my breakfast that day was bread and my tea the night before was the worst fries I’d had on the entire trip (Casey’s, for the record — soggy mess) but it was really good falafel. I loved it.

Personally I recommend the falafel and dhal, skip the Buddha bowl and find the truck selling French fries round the corner instead. You won’t regret it.

So let’s talk about how I accidentally ordered something non-vegan so you can learn from my mistakes.

After we checked in we were really hungry and headed into Disney Village for some food. I knew some of the places where I could eat but my Dad and Kelsie took one look at Annette’s and wouldn’t be persuaded into anything but a burger.

I did a quick google and the internet told me that I could have the soya burger without the cheese and slaw. That’s what I ordered. What didn’t occur to me, until I was going through the pictures later, was that the bun was awfully shiny. Yes, it had an egg wash.

The rest of the burger was great. It had giant slabs of well cooked veggies and was served with some amazing fries. In fact we ate a lot of really good fries on this trip. Must be the proximity to Belgium. I don’t think I’d go out of my way to eat here again, not unless they got a vegan bun, but I wouldn’t mind going if Kelsie and my Dad wanted to. Or get some take away fries.

Even though Disney World is our usual hangout we — we being my Dad, my cousin Kelsie, and me — decided to go to Disneyland Paris. For the first time. So much like I did when we went to Disney World, I’m going to tell you all about eating vegan there.

How Easy is it to Eat Vegan in Disneyland Paris?

Well you’ll eat. Maybe not what you want or when you want but you won’t starve.

There’s also a culture/language issue which means that you might not be able to ask the questions you want and if you manage to ask you might not get the right answers. I’ve found Vegan Disney Paris absolutely invaluable for telling me what I can eat. And very gently telling me when I accidentally ate egg.

The other issue I had was with closing times. We went to Disneyland about 6pm and one of the places that I knew had vegan options was closed and a second place was sold out, so I had to make do with French fries. my advice there is to check, check again, never assume, and check one more time.

Tell Me About Your Trip

I once again travelled with my Dad and cousin Kelsie. It was also the first trip of Kelsie’s bump who, for the moment, is called Bruce.

We stayed four nights at Davy Crockett’s Ranch. There is a kitchen in the cabins but there isn’t a large amount of vegan food in the shop, although I did get pasta and tomato sauce and olives and lotus spread. I wish I’d have bought with me some vegan butter, cheese and some Tofurky slices but that’s something to remember for next time.

Did you have some sort of meal plan?

We had two meals a day: a continental style breakfast and a buffet meal. The price of the buffet could be taken from a sit down meal which gives you a bit more flexibility.

We had a bit of an issue getting breakfast. We were told we could pick it up from the main area or book it to pick up from a hutch by the cabins the next morning. Turns out that you could just pick it up from cabin. We could also get it from Starbucks, which was closed unexpectedly, and New York Style Sandwiches which was open, happily.

This is the breakfast for all three of us. The bread, jam, orange juice, cereal bars and apple sauce were all vegan. As is tea, when it’s served black. Which is the only way to drink it.

Kelsie happily ate my croissant and Nutella for me but if you’re not travelling with convenient non vegans then you can ask for it without.

As for our other meals… well that will be another entry.