To wrap up I cooked a meal inspired by another blog. I figured at the start of the month that I was probably going to cook something from Herbivore’s Heaven and her trip to Japan but until yesterday I wasn’t sure what I wanted it to be. I mean ideally I’d have gone to that dog friendly theme park with my Dad and Watson but that wasn’t in the budget. I made Curry Udon instead. 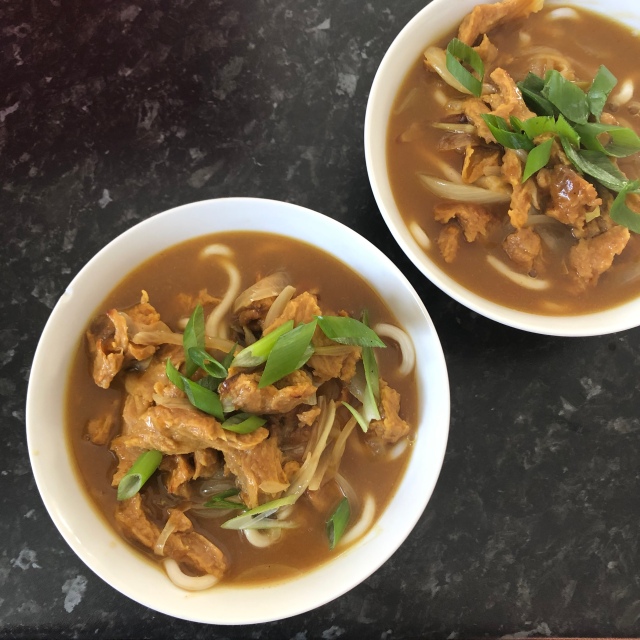 I used the recipe from Just One Cookbook veganised by using kombu dashi and chickwheat shreds in place of the meat. It was a perfect way to end Vegan MoFo 2019.

Last year I made a bacon sandwich so this year I thought I’d make another one. Only up my game a bit. To start with I made my own rolls. These are pretzel style burger buns from Vegan 100 which are pretty yummy if not entirely pretzely. I also made my own seitan bacon! 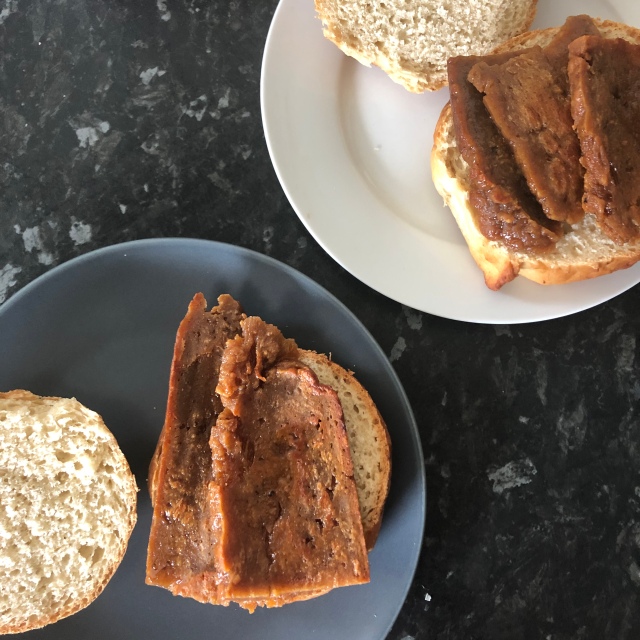 This recipe was recommended to me on Twitter and I went for it purely because it didn’t feature a fake vegan rind. Because being forced to eat bacon rind as a kid still traumatises me. It’s delicious but I would have liked a less soft and chewy texture. Still it was a fabulous sandwich.

I never know if I should call myself Straight Edge or not because honestly I’m just not that cool. I mean I haven’t been to a gig since my early twenties. Unless you count escorting my Guides to Wellies and Wristbands or Big Gig. Last time I went to Big Gig I actually fell asleep during it. So I don’t have the hardcore thing down but I don’t drink so I’m making mocktails today. 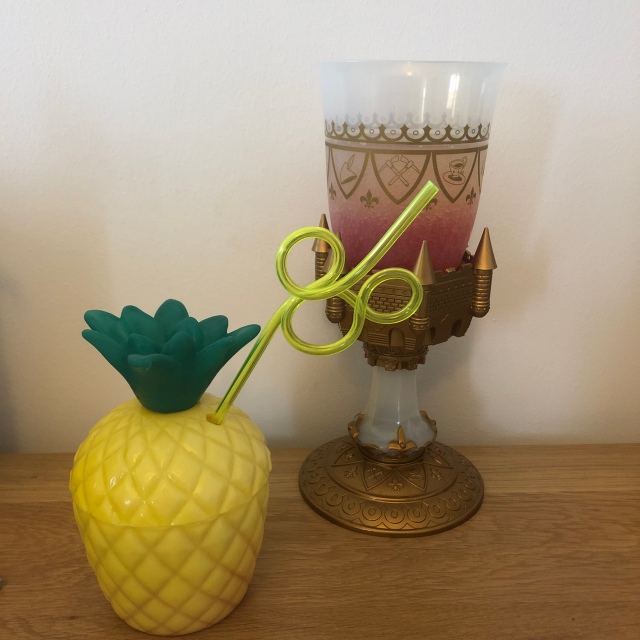 The other thing that’s inspiring my post is my fabulous collection of souvenir mugs! I was inspired by my pineapple to google pineapple mocktail and find this recipe. And then I put my serving into my favourite gaudy goblet from Be Our Guest. It lights up. It’s awesome.

This post is part of VeganMoFo 2019, a month-long celebration of vegan food. This week’s theme is travel, and today’s prompt is a dish that transports you back to a vacation.

Many vegans feel guilt about their pre-vegan days, particularly when in comes to treasured memories that are decidedly non-vegan. My advice? Be kind to yourself: you were brought up in a society that normalises the consumption of animal products, and you didn’t know then what you know now.

Seven and a half years ago, Clare and I went on holiday to Center Parcs with Clare’s dad. After a morning swim and an afternoon of archery, Clare’s dad wanted to relax in the lodge, so Clare and I went swimming again on our own. Afterwards I suggested we try Ortega, the tapas restaurant in the Center Parcs village. I made three discoveries that night: that not drinking alcohol doesn’t mean we can’t enjoy cocktails (virgin piña colada for me and Spanish sunset for Clare); that sweet and savoury can work together (honey and cheese croquettes); and that having a meal with your girlfriend in a dimly-lit and otherwise empty restaurant, followed by a lakeside walk under lamplight, is incredibly romantic.

Seven and a half years later, we’re married and vegan. This evening Clare returned from a long weekend camping with the Guides, and I welcomed her home by restaging that meal. But what could I do about the honey and cheese croquettes? Fortunately Marks & Spencer have ‘not-zzarella sticks’ in their Plant Kitchen range, so I just had to make the honey. 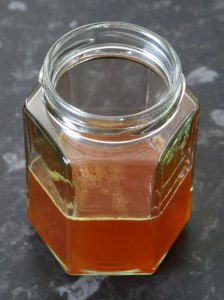 Search for vegan honey recipes and you’ll find dozens of variants on the same theme: combine two parts apple juice with one part sugar and boil down to half the original volume. I used golden syrup for the sugar. The result had a pleasing colour but still tasted strongly of apple juice. It worked well with the not-zzarella sticks, but no-one is going to be fooled into thinking it’s honey. The romantic meal, though? Just perfect.