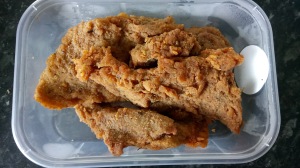 I opted for heating them in the oven and shoved them in a wrap with some lettuce and chilli sauce. It was really nice. Probably a bit cheweyer than chicken would be, but that’s seitan. The coating was thick, flavourful and crisp.

I really enjoyed trying the fried seitan, if you’re in Devon try to get some. They stock it at Seasons in Exeter. I can’t wait to see what How on Earth come up with in the future.