A year ago we ate a bunch of food from the Plant Kitchen range at Marks and Spencer. This January they released a bunch more into their vegan range. And we got a few bits to try. More than a few. Okay. 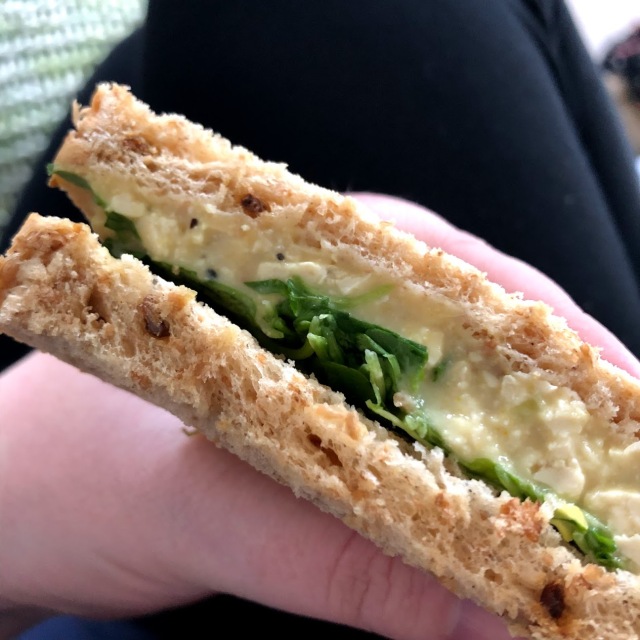 Both a no tuna sandwich and a no egg sandwich have been added to the range. The tuna sandwich has sweetcorn in it so I went for the egg instead. There was really no other taste but pepper. File this one under edible but disappointing. 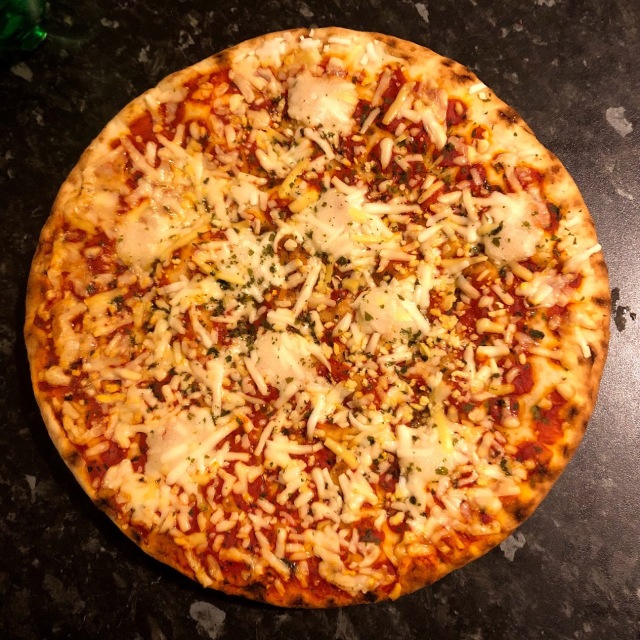 Speaking of disappointing, we were originally excited to find a plain cheese and tomato pizza. Kate likes things plain. But this was very disappointing. It tastes like one of those mini, 50p, basics range pizzas. All biscuit base and ketchup tasting sauce. The cheese made it a little more exciting but not much. We wouldn’t buy this one again.

Kate tried the Shepard’s Pie. She was delighted by the piped mashed potato but thought the filling had too much mushroom. There were also several whole chestnuts in there which textually is just odd.

Okay so what’s good? These No-Pork Sausage rolls are a great little snack option wrapped in a delicious flaky pastry.

I enjoyed these spring rolls, filled with a gorgeous shredded duck. Perhaps the hoisin sauce was a touch too sweet or perhaps you’re not meant to eat them all in one go. Either way, I’d do it again.

Now onto our favourite, and perhaps the entire internet’s favourite: No-Chicken Kiev. It is perfect. Perfectly chickeny, crisp bread crumbs, and that amazing, rich, garlicy, herby beautiful butter sauce. We loved it. I want more.

I have serious thoughts about plant-based milks. At the moment my favourite is Minor Figures which is a barista-style oat milk. We get it delivered a few cases at a time and mostly use it for hot chocolates. The level of waste is annoying so when we heard that Earth. Food. Love. would be bringing out their own plant milks we got very excited. And got one of every flavour.  We tried each one, first plain and then I streamed the milk and made us hot chocolate. 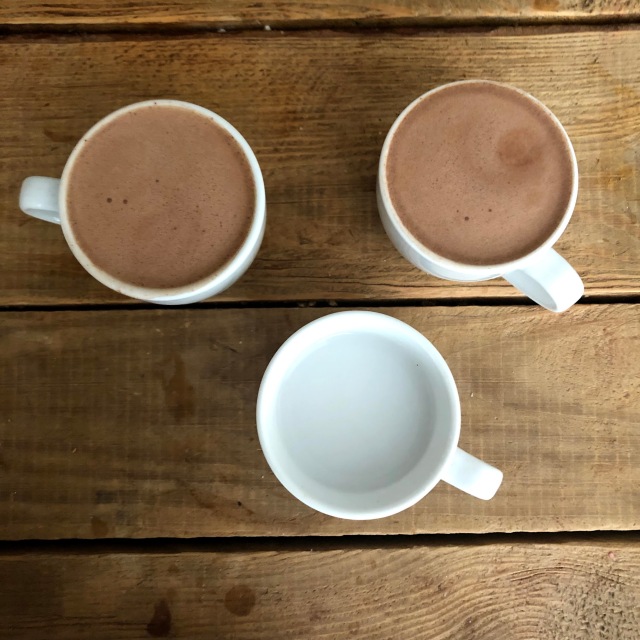 First up is coconut. I’m a little biased against coconut. I find the texture a combination of too watery and too greasy – predictably I wasn’t a fan. It was also lacking in any sweetness which doesn’t make it easy to drink raw but did make the hot chocolate taste, in Kate’s words, like a dark chocolate Bounty.

The oat milk on its own proved pretty tasteless (Kate thought it was rather sour) but it has a glorious texture which makes it perfect for your teas, coffees and hot chocolates. You might need a little sugar if you’re used to dairy – it’s lacking in the dairy sugars after all.

This almond milk is 50% raw, 50% roasted almonds. As a result it’s a little bitter. It has the slightly nutty aftertaste that you expect from almond milk and it’s a good texture for hot drinks. I always like an almond milk in hot chocolate – the tastes really complement each other.

And last up our favourite: the 100% roasted almond. With a richer, sweeter, more robust flavour than the 50% we enjoyed drinking this both straight and in hot chocolate. Its distinctive taste might not be what you are looking for with your tea though.

ReRooted (website) milk is currently available at Earth. Food. Love. in Totnes. They’re hoping to start a milk delivery service soon so keep your eyes peeled if you live in the Totnes area.

Marks & Spencer have come up with a vegan range that they launched just in time for Veganuary. Shocking coincidence or marketing genius? We bought a tonne so we can’t really complain.

We’ll start with the things we don’t have pictures of. Kate tried the Cashew Mac. I wanted to but I can’t eat mushrooms when I’m stressed so I left it to her. Apparently the mushrooms overwhelmed the dish. Disappointing when you want to tuck into a nice cheesy sauce. Kate also had dibs on the Lasagna which was basically just a lasagna although she admits her ambivalence may have something to do with never having had a lasagna with mince in before she went vegan. We tend to make a plain tomato lasagna at home.

The No Turkey Feast appeared before Christmas but now it’s been joined by some other cool on-the-go options. They were all sold out of all the other new bits though. The sandwich is a ready-made sandwich so obviously not the best thing I’ve ever had but the turkey was delicious, the mayo smooth and creamy and the cranberry really brightened things up.

Two-for-one here. We have the No Chic’n Nuggets and the Dirty Fries. According to Kate, an expert in these matters, The nuggets taste exactly like the real thing. The dirty fries are covered in tomato sauce and béchamel and cheese. So, so satisfying.

I had the BBQ Pulled Jackfruit pizza one evening before rushing off to a meeting. I liked this one but it was a little too sweet and not terribly filling. Nice but not nice enough for the price. 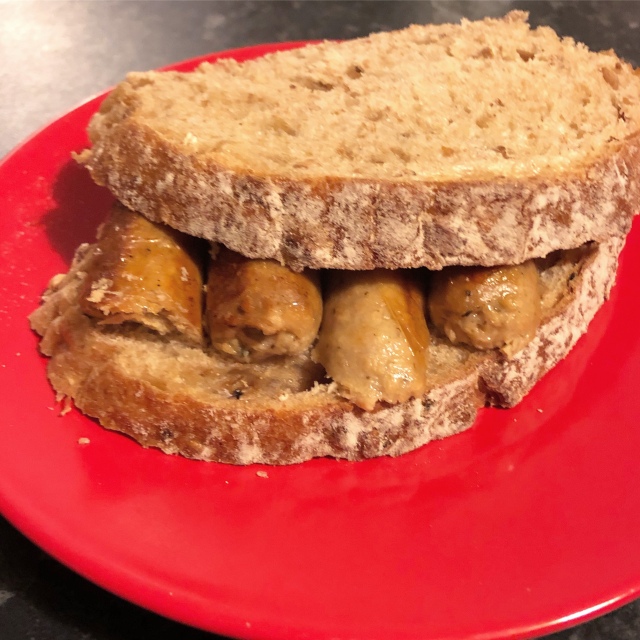 We grabbed a pack of the No Pork Sausoyges to eat for breakfast. They have a skin on them which makes them really exciting from a texture perspective but they taste of pepper and not much else. Still I bet these would be great on a barbecue, with the skin allowed to crackle and char.

The final product we tried was the tikka masala. It’s basically your standard chicken tikka masala ready meal, only vegan. Like with the sandwich it’s exciting that we have vegan options but never going to be all that exciting. Still, it’s a Marks & Spencer ready meal so it’s still tasty but four minutes in the microwave is never going to result in something amazing.

That’s basically the idea though. It’s the standard foods you’d find in UK supermarkets, only made vegan. There is a block of tofu in the range and a sushi roll but mostly it’s BBQ pizza, ready meal pasta, and microwave curry. You could switch to these foods and not overly change your diet. For me the price is going to stop me buying from the range often but I could see us grabbing a couple of bits a month. And a sandwich, no doubt, when we’re stuck in a service station or train station somewhere.

When Asda introduces vegan cheese to their choose your own toppings counter it was big news. It’s been years since I’ve visited one of these counters and I can’t say I’ve missed it but you know what let’s give it a go. We got two 10″ pizzas with vegan cheese, one plain and one with all the veggies.

They were bad. Okay so the base is just basically a biscuit. Hard, crispy and bizarrely sweet. I could’t taste the tomato sauce so I’ll just assume it was okay. There was far too much cheese so at the centre it was just like a pile of white sauce. It didn’t really have any flavour to it at all.

So we’re probably never going to buy these again. But that might be progress. 2018 could be the year when vegans are just as disappointed with supermarket pizza as meat eaters.