To demonstrate how behind I am with blogging I bought the BBQ Bumper Pack so I could eat the last of it for my birthday. My birthday that was in May. Lockdown hasn’t left me in a great head space. Though it has protected my lungs and I’m thankful for that. Anyway Sgaia Bacon has long been our favourite vegan bacon but I wanted to branch out a little so I ordered us one of their BBQ Bumper Packs so I could try the steak and burgers and still enjoy a bit of that bacon.

With herbs and sundried tomatoes, the Aromatico Burger has a distinctly Italian taste to it. It’s the reason I invented the Focaccish and Pesto Wedges and I really love the flavours. The texture is just spot-on burger. There’s something to get your teeth into but they aren’t going to get stuck there or anything. I actually love this burger. Kate, as it turns out, does not. All this time I didn’t know this about her but she is a burger purist. She wants her burgers to taste of beef and nothing else (unless it’s a chicken burger, I assume), but she does concede that the flavours would make for a good meatball.

These are, without a doubt, the best vegan rashers in existence. No contest. If you’re only looking to buy one Mheat product go for these. The work on a burger, in mac and cheese and – shockingly – in your breakfast.

I had this one for my birthday alongside hassleback potatoes from I Can Cook Vegan. I didn’t ever really enjoy the non-vegan version of steak so I’m not sure why I wanted to try this so much for the first time on my birthday, but I was not disappointed. It’s got a deep, umami rich flavour and a lovely finish of smoke. I really want to try it in a stir fry  but for the first time, for my birthday, I had to have a decadent slab of it on my plate. 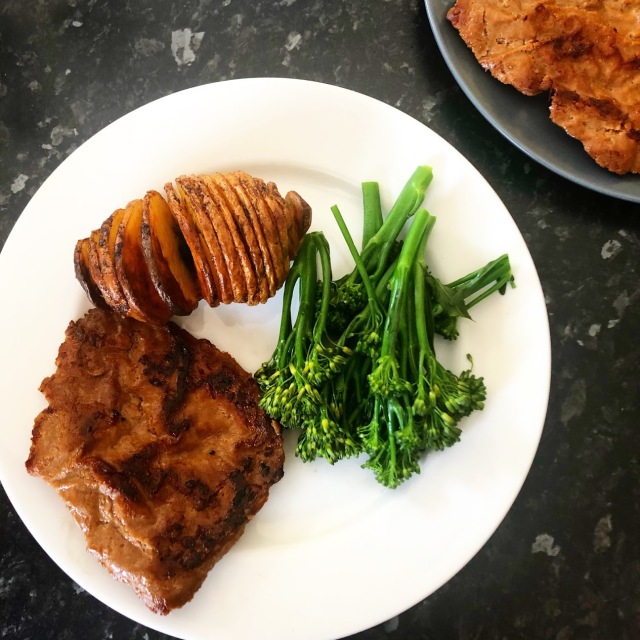 If you’re interested in trying all three of the Mheats then the BBQ Bumper Pack is a great deal. It’s £25 and you get two steaks, two pack of burgers (four total), and two packs of bacon. That saw the two of us through four meals: bacon cheeseburgers, bacon butties, Italian style burgers and birthday steak. But at the very least buy yourself some of that bacon. A steal at £4 a pack. And for reference we find one pack enough for two of the best vegan bacon butties.