Today we move on to pastry which is an area I’m not exactly well versed in. But I try, and also I cheat.

Vgeanised by being a cheating cheater who cheats and never makes her own puff pastry. The cheaper Jus-Rol is made with veg fats instead of butter. 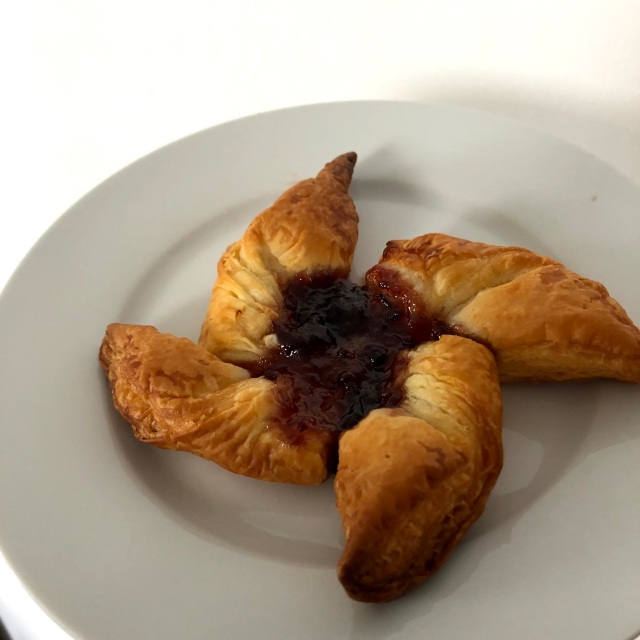 Turns out that constructing these based only on a line drawing was a little difficult and my fist batch can out looking like… well like a symbol that isn’t appropriate. Thankfully, after a quick google my second batch turned into a beautiful star. The taste fantastic. Plum is an amazing jam.

Veganised by replacing the butter with Naturli block and using oat milk to bind the pastry rather than egg.

So far in these write-ups of my experiments I’ve been using the Swedish words for the baked goods. I’m doing it in the hopes that one of the words will stick and I’ll have gained at least one word of a foreign language out of this project. Which I’m mentioning because this is Danish instead.

I wish I’d used a mix of Trex and Vitalite for the sweet shortcrust rather than the Naturli block. It was incredibly hard to work. But when cooked and used as the bread in a fabulous jam sandwich it was perfect. Thankfully I only made a half batch because we ate them all very, very quickly.

That’s it for pastry, tomorrow we’ll be looking at bread. Brace yourself. I’ve baked a lot.