As Animal Kingdom Lodge was our home for two weeks Mara was our regular quick service. There is nothing vegan on the menu, which is irritating, but when I asked what could be made vegan I was offered the choice of the tomato flatbread without ricotta or the falafel without feta cheese and yogurt sauce. I tried the falafel first. It came with bread, hummus and salad. All really tasty. It’s nice to be reminded that falafel can taste great after all the supermarket falafel wraps you have to live through as a vegan. 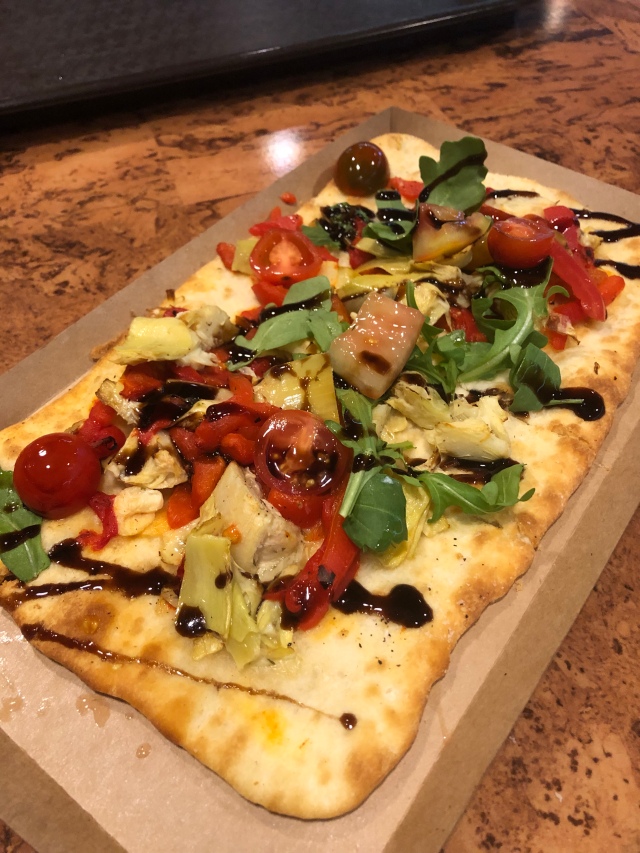 A couple of nights later I ordered the flatbread. This one was just okay. The balsamic glaze really didn’t work with it. It just overpowered the other flavours.

Then, towards the end of the first week, I saw a new cake appear. This is the plant-based flamingo cake. It was one snack credit and I could only eat half of it. Lovely.

For breakfast you have to ask but they’ll make you allergy waffles and a tofu scramble.

At Captain Cook’s the Pan-Asian Vegetables and Noodles are vegan. It’s fairly tasty, the noodles I had were overcooked but the sauce was tasty, with a little bit of a kick. Not very filling though.

Considering the diet of B.B. you might not expect vegan options here but the vegetarian sausage with marinara sauce, peppers and onions is amazing. We couldn’t work out why the line was so small when we went but my Dad said I had to leave it off social media to keep it that way. One of the best.

If you want vegan pizza (or any pizza – just ask the rest of my family) you want to go to Blaze where you can get a pizza custom made. Vegan cheese comes at no extra cost. We’re slightly obsessed with this place and we can’t wait for a franchise to open up in the UK (hint, hint) 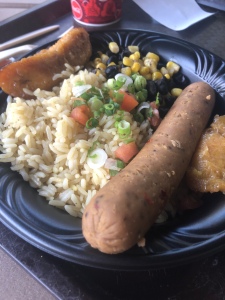 This counter service spot is a long-time favourite of mine with an interesting menu despite its water park location. I got the vegetarian sausage rice bowl and I was very pleased with my choice. The sausage was great and I’m basically in love with plantains. I drizzled on a little hot sauce and it was perfect.

Landscape of Flavours (Art of Animation)

We stayed at Art of Animation on our last visit and it has one of the best food courts on property so we couldn’t resist going back for breakfast. It’s one of the few places that has a vegan option right there on the menu: Vegan Seitan Scramble. It’s really great! Well worth the drive.

Of course since I started writing this series more and more vegan options have been introduced. Just Egg has hit the parks, Caribbean Beach Resort is making waves, the Mara seems to be offering more and more options. The other side of the coin though is that menus are tweaked, items are retired and sometimes the vegan offering depends on what your server or chef can be bothered to offer. You can definitely eat vegan in Disney World and it doesn’t take much more effort to eat well. There are some true gems. Some of it fancy, some of it just classic theme park.